The origins of the Hamtramck Fire Department date back to February 11, 1857 when the “Hamtramck Spouters” organized themselves into a company known officially as “Spouters No. 11”.  Spouters No. 11 effectively served the area for twenty-six years, until 1883, when a firehouse was built on the northeast corner of Gratiot and Grandy Avenues, by the Detroit Fire Department for the service of that city’s northern district and the suburb of Hamtramck.

The village of Hamtrack was officially incorporated in 1901 and two years later, in 1903, the village president and clerk were authorized to enter into a contract for fire protection with the city of Detroit.

The current incarnation of the Hamtramck Fire Department dates back to November 16, 1914.  On that date, the department rules and regulations were established and its first chief, Martin Bishop, was appointed.  The department was then located on Berres Avenue in a two-car garage on the premises of the Detroit Lumber Company.  Three months later department operations were moved to the Briggs Manufacturing Company on Leuchner Avenue.  In later years “House 1” was moved to Jos. Campau and Grayling Street, adjacent to Police Headquarters. House 1 was closed in 1975.

The village’s rapid growth, due to the now booming auto industry, dictated a need for construction of two more stations.  “Engine House #2” was erected in 1918, located on the corner of Caniff and Mackay Avenues where, after several additions and alterations (*it continues to function as the remaining fire station in the city).  The third firehouse was located on the corner of Jos. Campau and Smith Street and opened in 1922, the same year Hamtramck attained status as a city.  Firehouse No. 3 was in operation for only six years as the construction of a railroad viaduct at Jos. Campau and Denton eliminated its necessity.

Of its many milestones, one of the most prestigious occurred in 1938. The Hamtramck Fire Department became the proud recipient of the “Paxton Mendlessohn Trophy” awarded by the Michigan Fire inspection Bureau to the best fire department in southern Michigan.

The years since its inception has brought many changes, not only to the Hamtramck Fire Department, but also to the community it serves.  But one thing that has not changed is the department’s high degree of commitment to excellence and service to the people of Hamtramck.  As it has always been and will always be the members of the Hamtramck Fire Department remain PROUD TO SERVE. 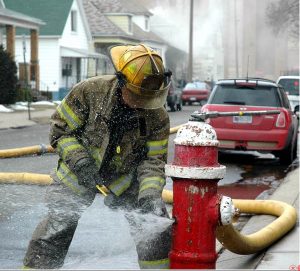