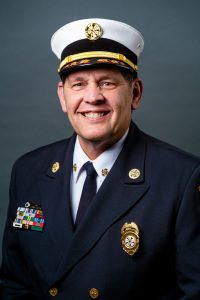 Chief Hagen was appointed the Interim Fire Chief of Hamtramck in August of 2016 and permanent Fire Chief March of 2017.  He began his fire service career starting in 1978 as a volunteer firefighter with the City of East Detroit (today – Eastpointe, MI).  He became a full-time firefighter in 1980 with Eastpointe and retired in 2010, the last 16+ years he held the position of Fire Chief.  He holds an Associated of Applied Science (Fire Science) Degree from Macomb Community College and a Bachelors of Applied Science (Public Safety Studies) Degree from Siena Heights University.  He has accumulated over 2,500 hours of training throughout his career, including state certified Fire Inspector, Fire Investigator, Fire Instructor and attended both the National Fire Academy and National Fire Staff and Command.

Since his retirement in 2010, he has remained active within the fire service profession.  He was an instructor for the Regional Alliance for Firefighter Training, a spokesperson with the National Fallen Firefighters Foundation and a guest speaker at numerous fire departments in southeast Michigan.  In 2009 he joined the MI1-Disaster Medical Assistance Team, a federal team through the U.S. Department Health and Human Services.  He serves as the team’s Acting Logistics Chief and has been deployed to New Jersey, Washington D.C. and in 2017 to Florida, to assist in the aftermath of Hurricane Irma.